The Callisto Protocol Release Date: When Will the Game Be Released?

It is a fantastic time to be a fan of horror. With upcoming releases such as the Resident Evil 4 remake, The Quarry, and the Dead Space remake, there will be no shortage of frights. The Callisto Protocol, which aspires to be a spiritual successor to Dead Space, is an upcoming spooky game that could be overlooked. During the June 2022 State of Play event, a new gameplay trailer for The Callisto Protocol was released, showcasing the game in action for the first time and revealing the game’s long-awaited release date. How will this game play, and when will it be released? Here is the pertinent information.

The Callisto Protocol is a survival horror third-person game designed for a new generation of players. It’s essentially a love letter to Visceral Games’ Dead Space (2008) and Dead Space 2 (2011), but with a decade’s worth of introspection and refinement from the game’s designer, Glen Schofield. If you haven’t played either of the best Xbox 360 horror games, you should know that you’re in for a hellishly terrifying time.

The Callisto Protocol builds a foreboding sense of tension through dense, dark, atmospheric levels, interspersing exploration with brutal combat against grotesque adversaries. The only way to survive is to hack off and blast away limbs, wrench foes into hazardous elements of the environment with a gravity gun, or pulverize flesh into mulch through brutal close-quarters combat. The Callisto Protocol, like Dead Space, is not for the faint of heart.

Glen Schofield told GamesRadar+ that there are biological similarities between Dead Space and The Callisto Protocol, but Striking Distance has tried to give its new-generation survival horror game more depth than just the usual killing and tearing apart. “Our game’s fights are different, right? You can choose what you want to do. There are melee and stealth options, and you can improve your weapons through skill trees.”

“The GRP is an upgraded version of the Gravity Gun that lets you pick up enemies. That adds sandbox elements since you can pick up things worldwide and use enemies as meat shields or throw them into fans or another enemy, says Schofield. “Through all of this, you can choose the path you want to take.”

When is the Callisto Protocol Release Date?

On December 2, 2022, the Callisto Protocol will be launched. Isn’t there nothing better than a good sci-fi horror game just in time for the holidays? Its release date was confirmed during the Gamescom Opening Night Live 2022 event.

Also Read: Tales of the Jedi Release Date: Where Can You Watch This Famous Series?

Where To Play The Callisto Protocol

The Callisto Protocol will be playable on PlayStation 4, PlayStation 5, Xbox One, Xbox Series X|S, and PC upon its release.

Who is the Callisto Protocol Developer?

Striking Distance Studios is a new company started by Glen Schofield, who has been in the industry for a long time and is known as one of the people who made the first Dead Space. The Callisto Protocol is the first game from the studio, but you wouldn’t know it from what we’ve seen so far.

This project will be published by Krafton, which is best known for its work on PUBG. It’s interesting that The Callisto Protocol started out in the same world as PUBG but then moved into its own world.

“Survival horror games have been my passion for decades, and I’m excited to use the latest consoles to take the genre to scary new places when The Callisto Protocol comes out later this year,” Schofield said.

What is the Callisto Protocol Story?

The Callisto Protocol takes place on the dead Jupiter moon Callisto in 2030. This location has been envisioned by Striking Distance Studios as “one of the most hostile and isolated environments in the universe,” and it looms over Jacob Lee throughout the events of The Callisto Protocol. 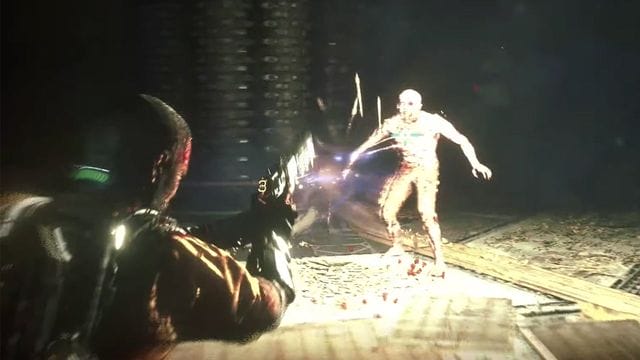 During The Callisto Protocol, you’ll assume control of Jacob Lee, an inmate at the Black Iron Prison on the surface of the dead moon. After a mysterious outbreak (typically) wreaks havoc on the moon, you’ll be forced to outrun and survive against bloodthirsty creatures that prowl the station, as well as uncover the mysteries surrounding the United Jupiter Company.

Schofield informs us that the story will be told through combat in the frigid corridors of the Black Iron Prison, in the environments (both above and below the surface of Callisto), and through cinematics interspersed throughout the action. “One way we tell the story is through other characters using cinematics, and we have approximately 45 to 60 minutes to do so. Between the tension and the difficult material, there’s a great deal of storytelling, and it’s a very rich story at that.”

Over the past two years, many trailers have come out, from the first Red Band trailer for The Callisto Protocol to the most recent story trailer that takes us inside the Black Iron Prison. Above, you can watch the longer The Callisto Protocol gameplay trailer from Summer Game Fest. This should give you a good idea of how the game works and how it pays careful homage to Dead Space, the game that inspired it the most.

What is the Duration of the Callisto Protocol?

The Callisto Protocol knows how important it is to not stay too long. Glen Schofield told Edge Magazine, which is a sister publication to GamesRadar+, in issue #377 that the main story of The Callisto Protocol is “trending toward 12 to 14 hours” Schofield says that there are “beta paths” through the game for people who want to see more of the Black Iron Prison and the horrors it holds. This will not only make the game more fun to play again, but it will also “encourage conversations between players who took different routes to finish.”

The Callisto Protocol is a survival horror third-person game. It’s essentially a love letter to Visceral Games’ Dead Space (2008) and Dead Space 2 (2011). The only way to survive is to hack off and blast away limbs, and wrench foes into hazardous elements of the environment with a gravity gun. On December 2, 2022, The Callisto Protocol will be launched. The sci-fi horror game will be playable on PlayStation 4, Xbox One, PC, and more.

Hope you find our post valuable for you… Many thanks for taking the time to read this! If you appreciate it, please leave a comment and share it with your friends. There are other articles available on researchblaze.

One of Us is Lying Season 2: When Will the Season 2 Be Released?

Gorilla and the Bird Release Date: When Will It Be Released?