That ’90s Show Release Date: When Will This Show Be Released?

The coming-of-age stoner-comedy tv series That ’70s Show is receiving a spin-off. Netflix unveiled That ’90s Show in early October amid the current societal infatuation with ’90s nostalgia. Like That ’70s Show, the new sitcom will be produced by the Carsey-Werner Company, along with That ’70s Show founders Bonnie Turner and Terry Turner returning to write with their daughter Lindsey Turner.

Hopes are that this team will give the show the same warm vibe as its predecessor, making the new series nostalgic for two reasons. There’s been a lot of early excitement already, so we’ve put together a thorough guide to everything we know about That ’90s Show so far.

That ’90s Show is said to be about Leia Forman, who is the daughter of Eric Forman and Donna Pincioti, and her grandparents, Red and Kitty. The show takes place in 1995. The show will be a continuation of the ’70s-themed series and will follow Leia and her friends in what we expect to be a ’90s version of the basement hangout, high school drama, first loves, and the classic “circle.” Of paprika. Green paprika.

“Hello, Wisconsin! In 1995, Leia Forman, the daughter of Eric and Donna, is spending the summer with her grandparents. There, she makes friends with a new generation of Point Place kids while Kitty and Red keep an eye on them. Sex, drugs, and rock ‘n’ roll will always be around; they’ll just look different.

In the seventh season of That ’70s Show, Eric left Point Place after he graduated from high school and the pressures of adult life started to hit. Eric leaves his lifelong sweetheart Donna at the altar on the day of their wedding because he can’t pay for college and is crazy. He then decides to become a teacher, so he leaves his friends, family, and Vista Cruiser behind and goes to Africa.

In Season 8, Kelso, played by Ashton Kutcher, was the next person to leave the small town. He moved to Chicago so he could be closer to his daughter Betsy after getting a new job as security for the Playboy Club. After a messy breakup with Hyde, Jackie falls in love with Fez out of the blue, which leads people to think that they end up together after years of flirty fighting. Donna, who just got rid of her boyfriend, thinks about dating Randy. Randy was hired to work at Hyde’s record store in the eighth and final season. He took Eric’s place. People didn’t like Randy very much, and he didn’t do much in the last few episodes. 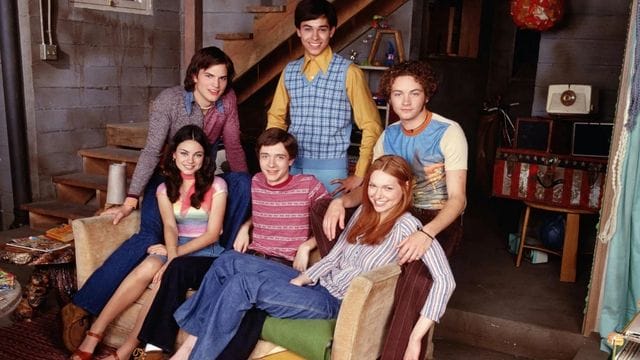 Since Eric and Donna have a daughter, we can assume that after that fateful kiss on New Year’s Eve in the 200th and last episode of the show, they got back together. But what happened to Eric and Donna if That ’90s Show is about Leia and her grandparents? We hope that the spinoff will answer these new questions. Fans of the first show want to know if the new one will have a similar group dynamic, but with a ’90s twist. We can’t wait to start trying to figure out who is Eric and who is Kelso, while Jackie tells Donna “As if!” and Hyde plays “Smells Like Teen Spirit” on a boombox.

How Will That ’90s Show Appear?

If the new program takes place in the old Forman mansion, we’re intrigued to see how it would have been updated for the ’90s. We wouldn’t mind hearing Bob Pinciotti’s “Hey there, hi there, ho there!” again, but with his house sold, we wonder who the new irritating and wonderful neighbors will be and if there will be another classic girl-next-door situation this decade. From enormous home computers to chia pets, it will be interesting to see what Red and Kitty think of the latest household objects, technology, and furnishings.

The episodes of That ’70s Show both praised and made fun of the fashion and music trends of the ’70s. Star Wars is the one thing we know will stay the same from the 1970s to the 1990s, with characters wearing bell bottoms and chukka boots to roller discos and rock shows. Since her father’s favorite movie from 1977 was about a princess, Leia may end up seeing The Phantom Menace when it comes out in 1999. We can also expect this new show to talk about important cultural, musical, and fashion moments from the 1990s, like the rise of hip-hop culture and grunge, heroin chic, and boy bands, as well as cringe-worthy throwback phrases like “talk to the hand,” “da bomb,” and “wassup!”

When Will the That ’90s Show Be Released?

Netflix hasn’t said when the highly anticipated series will be released but the streaming service has confirmed that it will start with ten episodes.

People are eagerly waiting for a trailer that will give them a glimpse into Leia’s world. Until then, we’ll be glued to the screen like Kelso to the fridge. We’ll just sit here and smoke Candy Land until then. I want you to play Candy Smoke. I mean…

You might not be able to watch the original series again before That ’90s Show comes out. After Netflix took That ’70s Show off in September 2020, it was never picked up by another streaming service. If you want to know how to watch That ’70s Show, we can help you out. Keep reading to find out more.

Where Will That ’90s Show Take Place?

The new show will also take place in Wisconsin, but we don’t know yet if Kitty and Red will live in the same Forman family home in the made-up small town of Point Place. We do hope that Leia will follow in her parent’s footsteps and go to the good old Forman basement, Point Place High, and the popular after-school hangout The Hub, where many french fry fights happened and famous stand-up comedian Mitch Hedberg gave deadpan lines from behind the counter.

The little village “where nothing ever occurs” inspired the original gang to go out and go on adventures, disobeying their parents as they matured. Point Place would allow Leia and her friends to independently visit punk rock clubs and hip hop performances, and perhaps revisit her parents’ graffiti on the water tower where Eric initially proposed to her (and was consequently made to wear the stupid helmet).

Netflix’s That ’70s Show is getting a spin-off, That ’90s Show. The new sitcom will be produced by the Carsey-Werner Company. Sex, drugs, and rock ‘n’ roll will still be around, just in a different form. In the final episodes of “That ’90s Show,” Eric and Donna kiss on New Year’s Eve.

The streaming service hasn’t said when the series will be released, but it will start with ten episodes. The new show will also take place in Wisconsin, but it’s not yet clear if Kitty and Red will live in the same town as the original gang. They’ll visit punk rock clubs and hip-hop performances.

Winnie the Pooh Blood and Honey Release Date: When Will the Movie Be Released?

Jim Edmonds Net Worth: Who Did He Play for and How Much is His Net Worth?