Kid Rock, the American rapper, has a very turbulent dating past. According to his followers, Kid Rock is a dating expert. He has always been quite amusing and charming. And he was able to captivate Pamela Anderson, the one and only. They met each other at a VH1 concert, where they had a night of rock and roll. In one of his interviews, Kid Rock stated that he would never forget that night.

Robert James Ritchie, also known as “Kid Rock,” was born on January 17, 1972, in the United States. He is a well-known singer-songwriter, rapper, and musician. With his fourth album, Devil Without a Cause, he broke through in 1998. More than 13 million copies were sold. On his fifth studio album, “Cocky,” songs like “Picture” and “All Summer Long” were big hits and sold a lot of copies.

The American rapper’s music includes rock, hip hop, heavy metal, and country. He is a self-taught musician who says he can play every instrument in his band and has produced all of his albums except for two. Kid Rock started out as a rapper and DJ. In 1990, he put out a record called Grits Sandwiches for Breakfast on Jive Records. Cowboy (1999), which was his most popular song at the time, is often seen as the first country rap song.

Regarding wives and marriage, Kid Rock was formerly married to Pamela Anderson. In 2001, they met for the first time backstage at a VH1 Divas Live tribute to Aretha Franklin.

Kid proposed to Pamela less than a year after their initial meeting, and they wed in 2006. After four months, Anderson stated that the pair had decided to separate.

Pamela Anderson filed for divorce in November 2006 and was granted one the following year. Kid Rock and Pamela Anderson did not have children throughout their brief marriage.

Pamela Anderson is a model and actress who was born in Canada. She was born on July 1, 1967, so she is 55 years old right now. Carol and Barry Anderson brought her into the world in British Columbia, Canada. Her father fixed furnaces, and her mother worked in a restaurant. Her younger brother’s name is Gerry, and he is also an actor and producer.

Playboy magazine is where Pamela Anderson became known for her glamorous modeling work. She was chosen as Playboy’s Playmate of the Month for February 1990. She has been in movies and TV shows like Scary Movie 3, Barb Wire, Baywatch, and more.

Kid Rock dated his high school sweetheart Kelly Russell on and off for 10 years. In 1993, they had a son named Robert James Ritchie.

Kid Rock had a relationship with actress and model Jamie King at that time. In 2000, they were together. In 2002, it was said that Rock was seeing Sheryl Crow.

In 2004, Kid Rock went out with American actress and model Jamie Pressly. From 2005 to 2006, he was seeing Conchita Leeflang. He is also said to have dated Jimmy Choo brand co-founder Tamara Melon in 2006. In the same year, Kid was linked to Erin Naas. 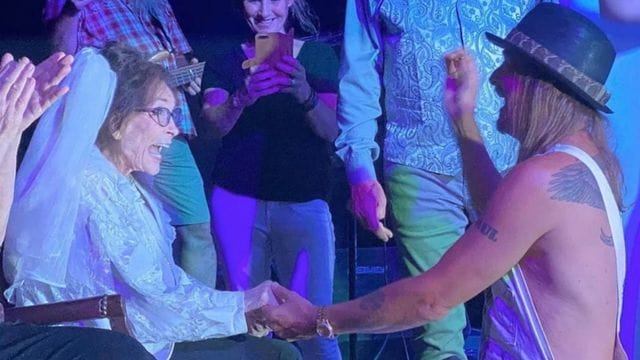 In 2009, it came out that Kid Rock and Kellie Pickler had been going out for about a year without anyone knowing. But they didn’t stay together for very long.

Kid Rock and Loretta Lynn, who had been friends for a long time, got married as a joke in 2020. Lynn wrote on Instagram that they got married after her son Ernest Lynn’s vow renewal in a surprise ceremony. She wrote in an Instagram post.

Kid Rock got his start in the music business in the late 1980s as a member of the hip-hop group The Beast Crew. He then met the rapper D-Nice, which led to him opening for Boogie Down Productions at local shows.

After that, he started working with producer Mike E. Clark. In 1988, he and Clark made a series of songs called “Demons.” These songs got offers from six major record companies, including CBS Records and Atlantis.

Kid Rock signed with Jive Records when he was 17. His first album, “Grits Sandwiches for Breakfast,” came out in 1990. In 1990, when this album came out, it made him one of the top two rap stars in Detroit.

In 1992, he signed with Continuum, a record company. In 1993, he made his second album in a studio. “The Polyfuze Method” was the name of the album, which was made with producer Mike E. Clark.

Later, in 1996, he put out “Early Mornin’ Stoned Pimp,” which was his most rock-styled album. Kid Rock says that 14,000 copies of the album have been sold.

In 1997, Jason Flom, who was in charge of Lava Records, met Kid Rock after one of his shows. Rock later gave him a demo with the songs “I Got One for Ya” and “Somebody’s Gotta Feel This” on it. This led to Kid Rock signing with Atlantic Records, which gave him $150,000 as part of his recording deal.

“Devil Without a Cause” was the name of his fourth studio album. This album made him known all over the country. More than 14 million copies of this album were sold. In 2000, rock was up for a Grammy Award as Best New Artist.

At the time this article was written, Kid Rock’s Instagram account, “kidrock,” had more than a thousand posts and 860,000 followers.

What Does Audrey Berry Do for a Living?

How Did Kid Rock Make His Money?

Since the 1990s, Kid Rock has been one of the best-selling music artists in the United States. Kid Rock makes more than $34 million a year from the royalties on his music. According to Kid Rock’s most recent tax returns, he has paid millions of dollars in personal income tax. Most of Kid Rock’s music was made by him.

What is the Age Difference Between Loretta Lynn and Kid Rock?

The country singer, who is 88 years old, joked on Instagram that she married the musician, who is 39 years younger than her, in a surprise ceremony right after her son Ernest Lynn and his wife, Crystal, renewed their wedding vows.

Kid Rock’s music includes rock, hip hop, heavy metal, and country. He is a self-taught musician who says he can play every instrument in his band. Kid Rock dated his high school sweetheart Kelly Russell on and off for 10 years. Kid Rock got his start in the music business in the late 1980s as a member of The Beast Crew. His first album, “Grits Sandwiches for Breakfast,” came out in 1990.

In 2009, Kid Rock dated Kellie Pickler for about a year without anyone knowing. Kid Rock’s 12th studio album, Bad Reputation, came out on April 6, 2022. Kid Rock makes more than $34 million a year from the royalties on his music. The country singer Loretta Lynn married Kid Rock after her son Ernest Lynn and his wife, Crystal, renewed their wedding vows.

Neyo Divorce: Why Did His Wife File for Divorce Against Him?

Jasmina and Michael Still Together: They Get Married or Not?

Jake and Rae Still Together: Reason Behind There Breakup?

Are Julia Michaels and JP Saxe Still Together 2022: What the Reason Behind There…